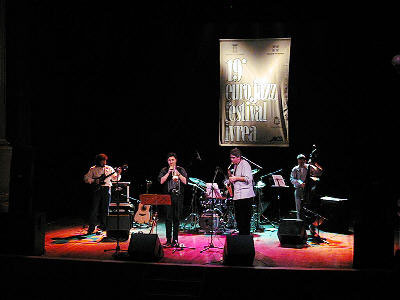 Another demonstration of Berne's willingness to pledge his talent and aptitude beyond the astonishingly wide range o his own projects, this time hitching up with the Italian improv outfit Enten Eller.
Despite the group's moniker and Berne's muscular presence, Brunod is very much he centerpiece of this session. His repository of guitars and effects laces each piece with an indelible stamp, and as someone who has never really been a fan of such gadgetry, I found his apparent devotion to such devices difficult to digest.

There are infrequent sections where he eschews these gimmicks and plays clean. These reprieves hint at a guitarist of merit and I wish they were more frequent. For his part Berne takes an active role in the realization of each piece. At no point does he appear content to play the role of obligatory guest star and rest on his laurels .Regrettably, his solid contributions frequently aren't enough to cury off the pieces alone. The opening "Mostar" sets this trend in motion, stirringspats of ferocious improvisation with ill-advised relaxation passages compliments of Brunod's guitar. The group dives into collective discord on "7/13", but again Brunod compromise matters, this time with a series of droning loops. These looping techniques are also distracting on later tunes such as the "Kubriks" and "Sud" "Caddau" has a shaky start through a mumbling bass introduction, but picks up pace with the entrance of the ensemble.

This one features an excellent extended solo by Berne marred by muffled-saturated comping from Brunod in the background. On "Per Emanuela" a ballad by Barbiero, Brunod straps on his acoustic and is far more effective. His sharp, clean string pops create a generous amount of space and volume against Maier's opaque bass lines .His solo following a lyrical preface by Berne and Mandarini is filled with quiet imagination and it left me lamenting his affection for effects even more.
Berne and Mandarini share a complementary approach on most of the tunes, most notably on "Genetic Deficit" where their tight, interspersing lines spread across a drowsy, chugging rhythm. Maier sets straight his earlier stumbles on the concluding "Sud", generating a cyclically vibrating bass figure grounded in Near Eastern techniques. Despite several lapses in the material and my admitted guitar biases, over-all I found the disc satisfying. Followers of Berne will probably be impressed by the collaboration and should take a chance on it.